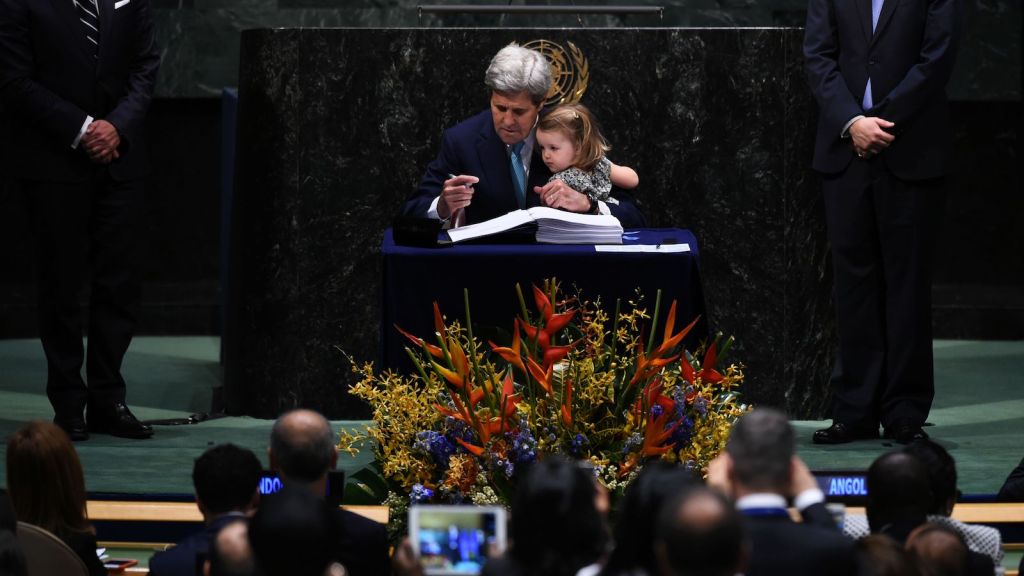 US Secretary of State John Kerry holds his granddaughter during the signature ceremony for the Paris Agreement.Jewel Samad / AFP / Getty Images
reporting for duty

In a flurry of new cabinet appointments on Monday, the Biden transition team announced that John Kerry — a former secretary of state and key player in crafting the Paris climate agreement — will take over the crucial role of presidential special envoy on climate change.

Kerry will get a seat on the National Security Council, the chief body responsible for planning foreign policy and military matters. It’s the first time anyone on the council will be focused solely on the climate, and the latest sign that President-elect Joe Biden intends to use the tools of foreign policy — and not just executive actions at home — to combat global warming.

“The big question has been, ‘How serious is the new administration about climate change?’” said Nathaniel Keohane, senior vice president of the Environmental Defense Fund. “This is a tremendously important signal. It says that the Biden administration is committed to making climate change front and center in terms of how we engage with the world.”

The Obama administration also had a special envoy on climate change. For most of the Obama years, the position was filled by Todd Stern, former senior negotiator on the Kyoto Protocol. (In 2017, shortly after President Donald Trump announced that he would pull the U.S. out of the Paris Agreement, the State Department eliminated the position entirely.)

Kerry is not exactly a surprise pick. The Democratic presidential candidate in 2004 and former senator from Massachusetts brings a long history of international negotiating — and concern about climate change — to the role. He served as secretary of state under the Obama administration for four years and helped craft the 2016 Paris Agreement, the global agreement to limit greenhouse gas emissions. Last year, Kerry launched an initiative called World War Zero, designed to help bring U.S. emissions to “net-zero” by 2050. The initiative included Republicans like former Ohio governor John Kasich, as well as President Bill Clinton and former California “governator” Arnold Schwarzenegger.

Despite his establishment credentials, Kerry has earned the respect and support of some of the most left-wing climate activists. He and Representative Alexandria Ocasio-Cortez co-chaired a task force on climate change for the Biden campaign after Senator Bernie Sanders dropped out of the presidential race; the task force also included Varshini Prakash, who co-founded the youth-led Sunrise movement.

After the Biden transition team made the announcement on Monday, Prakash wrote on Twitter: “I served w/ Sec Kerry this summer on the Biden-Sanders taskforce & one thing is clear: he really does care about stopping climate change. That’s something we can work with.”

While some outlets reported that Kerry was taking on the role of “climate czar” — another position popularized by the Obama administration — that role will likely go to a more domestic-focused player. At least under Obama, who picked former EPA administrator Carol Browner for the job, the climate czar was responsible for helping direct and strategize action at the national level.

But with a Senate likely controlled by Republicans, international negotiating is looking more important than ever. Biden campaigned heavily on climate change, promising to spend trillions on clean energy and rejoin the Paris Agreement (which the U.S. officially left the day after the 2020 election) in the first days of his administration. A Republican-run Senate, however, will put huge clean energy spending out of reach, forcing the Biden administration to rely on executive actions — and try to pressure other countries to take action.