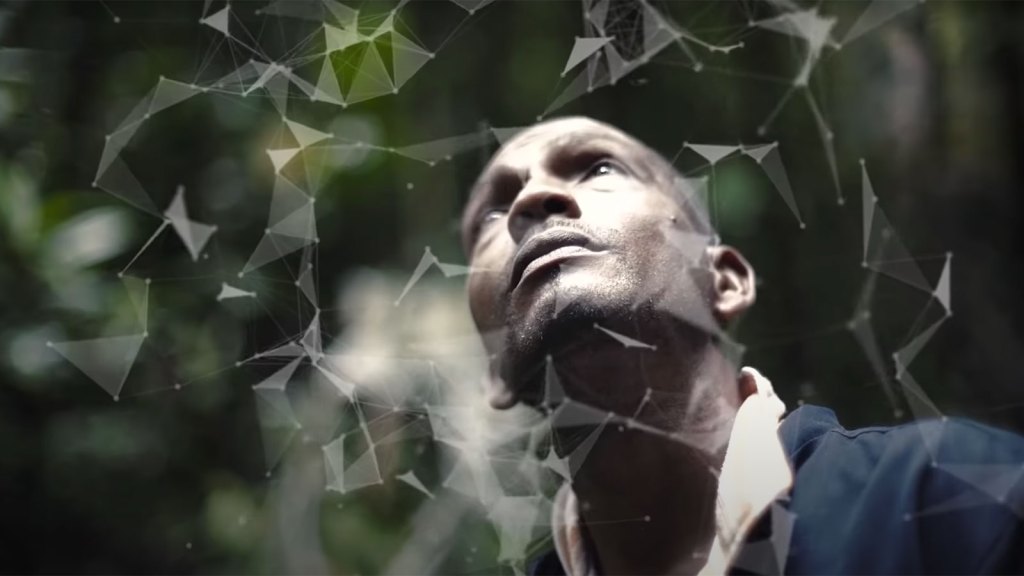 Environmental justice may not sound like it’d make for a good bop, but “D jame Respirar,” the new release from Bomba Est reo, one of Colombia’s most popular bands, manages to be equal parts deforestation PSA and dance party mood setter. That’s basically par for the course for the group, whose members believe musical roots cannot be separated from the land that inspired them.

The music video for the song, which translates to “Let me breathe,” acts as a kind of love letter to (and perhaps, from) the Colombian rainforest and its denizens. It opens with an aerial view of a wide river flanked by lush greenery. Birds chirp as a boat speeds along the curves. The scene shifts to a bonfire, where an Indigenous woman sings as constellations appear and disappear from view. The visuals are part of a documentary collaboration between Sim n Mej a, the founder and bassist of Bomba Est reo, Stand for Trees, a nonprofit that works to protect endangered forests, and the American actor Joaquin Phoenix.

Bomba Est reo is known for bangers like “Soy Yo” (I’m me), “To My Love”, and “Internacionales” (Internationals). A lot of the band’s music has a feel-good, funk-meets-pop sound that’s also inspired by Latin American genres like cumbia and champeta. The group’s style is also central to Mej a’s passion for environmental justice: Without Indigenous and African influence, he asserts, modern Colombian music wouldn’t exist as it is today.

Especially with his newer solo projects, like his September solo album Monte (translation: mountain) and the documentary Sonic Forest, which was released along with the D jame track last week, Mej a said his goal was to translate his passion for climate conservation into his preferred form of activism: music.

“It was kind of a mix of musical experimentation and trying to understand the environment from the musical point and the sound point of view — more so than from an activism point of view,” Mej a told Grist. “It was more through connecting with nature [and those marginalized communities], through sound, and through my music.”

Colombia is home to many Afro-Colombian and Indigenous-Colombian communities that are bearing the brunt of the climate crisis alongside other societal issues, such as the violence that has plagued the country for decades. Mej a and his fellow band members have been involved in their country’s environmental movement for several years, including voicing opposition to deforestation and mining. In 2019, the band embarked on a month-long tour around Colombia to fundraise and raise awareness for Guaviare, a Colombia municipality that lost over 90,000 acres of rainforest to deforestation.

Sonic Forest takes the band members’ eco-messaging to a new level. In the documentary, the Afro-Colombian community is shown living sustainably along the Pacific Coast where townspeople forage for food, learn what herbs to use for food and medicine, and create instruments with the materials they gather from their natural surroundings. Mej a, who acts as narrator, explains how some of the community members in that particular area used to make a living cutting down the forest. In choosing to preserve it and live off of eco-tourism instead of logging, community members had to change their lives and lean on traditions.

The documentary includes interviews with Indigenous people who have been displaced by the rampant violence in the country and are trying to continue preserving traditions for younger members. It also touches on how companies and drug traffickers raze large swaths of the forest in order to promote their own financial interests. Those who oppose them — including social and environmental leaders — are literally putting their own lives in danger.

But Mej a remains a musician throughout his documentary journey. As he travels, he collects sounds from the shoreline, the birds in the forests, and the flutes that were inspired by the birds. It’s the same process Mejia used to create his September solo album Monte, which was inspired by the country’s natural beauty and peoples, and featured bird sounds and Indigenous singers — including Candil Chauta, a singer from the Mhuysqa tribe, which used to inhabit the central Andean mountains.

Mejia says he wants “Western people,” or “White” Latin Americans like himself, to draw inspiration from the sounds he gathers and understand that they can support sustainable solutions in Latin America and beyond. Using sound, he creates a kind of map of the richness the Colombian wilderness has to offer — and that is up to us to preserve.

“It’s a global problem for everyone,” he said. “We can keep our lives, but in a more sustainable way. We have to stop and listen to [Indigenous peoples], because they’ve been sustainable for centuries.”