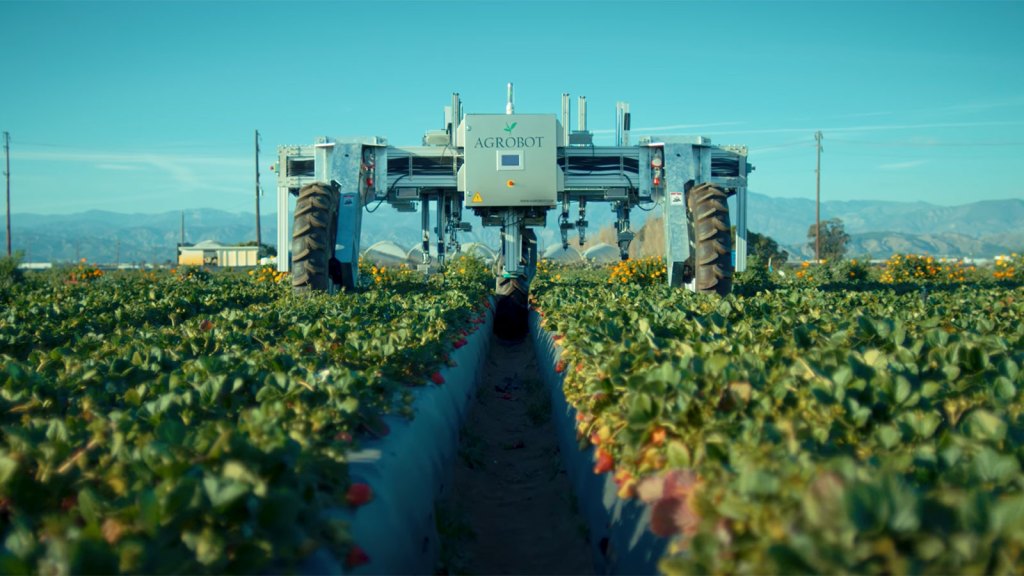 Electric cars and renewable power plants tend to get all the attention when it comes to clean tech. But this harvest season, you might also spare a thought for those working just as hard in the food tech sector to build autonomous tractors, and weed-stomping robots designed to grow more food while using fewer resources.

The climate argument for ag-bots is simple, said David Zilberman, an agricultural economist at the University of California, Berkeley. Farming needs better technology to replace the materials we currently get from fossil fuels, and the bots can help.

As our economy currently operates, we dig fossil fuels (coal, oil, gas) out of the ground, turn them into other stuff (plastic bags, carbon-fiber mountain bikes, and apartment buildings), and then bulldoze those products back into the ground (a landfill) at the end of their useful lives. But the greenhouse gases associated with all that consumption stick around in the atmosphere, hence our little problem with the warming of the earth.

One way we could fix this problem is by making more stuff out of plants, Zilberman said. As plants grow they naturally pull carbon out of the air and store it. Turn plants into bags, bikes, and buildings, and you have a nifty carbon capture system. But farms will have to become more efficient if plants are to outcompete petroleum, and this is where the robots come in.

Autonomous farm bots are just the latest chapter in a centuries-long turn from underpaid (and often unpaid) labor, to machines. Field combines, for example, take care of three jobs: Reaping (cutting stalks), threshing (detaching grain from plants), and winnowing (separating seed from chaff). Each of those processes once took the full concentration of a group of workers. Now a single driver can pilot a combine down rows of corn and watch a golden stream of corn stream into the hopper.

The more sci-fi side of green agricultural tech isn’t exactly hidden: If you know where to look you can find videos of the machines from companies hoping to sell the farm-bots of the future. The prototypes run the gamut from wonderfully menacing to captivatingly ingenious. On top of that, the creators (the would-be Elon Musks of agriculture) tend to pair these scenes with unabashedly cinematic-style soundtracks.

In short, these videos are awesome.

Here, for your delectation, are a selection of farm-mech videos, along with a sense of what they might mean for a more sustainable food system.

If you like monster trucks and autonomous vehicles, you’ll love this industrial autonomous tractor concept from CNH Industrial. It features the music of a cheesy action trailer, and a vehicle that looks like an angry metallic bulldog pup. But while the dramatic narration might have you chuckling, autonomous vehicles make a lot more sense for farmers than for bored commuters looking for a cheap chauffeur.

With no driver or cab, autonomous tractors would be lighter, doing less damage in compressing the soil. And if a tractor can operate without monopolizing a farmer’s time, it would make more sense to apply a little fertilizer just to the spots that need it. Right now, farmers are more likely to apply fertilizer to a whole field at once, which leads to pollution of the water and air.

This next video’s version of an autonomous tractor is green — literally and figuratively. By running on electric batteries, rather than gas, these machines could become the low-carbon norm. But would Midwestern farmers really exchange their beloved diesel engines for sleek electric drivetrains? Sure, if they work. There’s precedent with the construction industry: Carpenters were happy to switch from gas to electric power tools when it became clear that they were the superior option.

This heavy-duty AGROBOT is designed for quite a delicate task: picking strawberries. It’s much harder to automate fruit and vegetable picking than grain harvesting. That’s because grain is hard, while produce requires a soft touch. So the breadbasket Midwest is ruled by complex machines, while migrant laborers do most of the work in the salad-bowl states like California. If the AGROBOT (or its similar green-mech ilk) catches on, that could signal a significant change for the Golden State’s fruit-growing operations.

Speaking of fruit-picking robots, there are a couple of apple picking prototypes that are worth a look. This three-fingered model shifts, twists, and plucks with a satisfying mechanical whirr. According to the video, it uses a self-driving mechanism and can determine when fruit is ready for harvest. How’d ya like ‘dem apples?

I know we’re on a robot roll here, but it’s important to recognize that fully mechanized ag is far from a foregone conclusion. These robots are clumsy and slow compared to humans. Skilled farmworkers like this one move with incredible grace and efficiency.

This incredibly skilled worker earns $1.86 per 60 bundles of radishes. She’s done this work for the same employer for more than a decade and has the method down to a science. #WeFeedYou #ThankAFarmworker pic.twitter.com/VVVAhCR1OA

But the United Farm Workers union isn’t opposed to new technology. Machines can make the work easier on the body. When robots take on the parts of the job that force people to bend all the way to the ground, workers can take on more ergonomic tasks such as sorting the produce into boxes while riding in an upright cart following the harvester.

This next machine, for example, plucks radishes from the ground like magic. And while more machines mean fewer workers, history has shown that the workers who remain get raises, Zilberman said. They get higher-paying jobs working with and repairing the machines. Those jobs are also more likely to stay in one spot year-round, giving workers more family time and stability.

Click on this next video for the entertaining Australian accents, stay for the herbicide-reducing technology.

Weeding has proven to be one of the hardest jobs to automate. It’s very hard for a machine to tell which plants are the cash crop, and which are the competitors. As a result, farmers often spray entire fields with herbicides designed to kill weeds and spare the grain. But that’s expensive, wasteful, and polluting — not to mention potentially hazardous to the health of those who live near the fields. So it could be very good news that new robots with cameras are able to pick out the weeds and zap them, reducing herbicide use by more than 95 percent, according to one farmer using the bots in this video.

This last video is a family affair — specifically, it’s set on a small family-run dairy farm in Wisconsin. That may seem surprising since mechanization enables a larger trend toward larger farms. As food prices go down, farmers have to produce more per person, or their incomes will go down too. And so farms have grown, while the number of farmworkers has plummeted. Over the course of 200 years, the United States has gone from a country where 83 percent of people worked on farms, to a country where around 3 percent of the population feeds the rest of us.

But technology doesn’t always drive people out of farming. As Paul Robbins, dean of the University of Wisconsin, Madison’s environmental school, has pointed out, robots sometimes preserve the structure of family farms by taking care of the most dangerous and lowest-paid work. And, as this video points out, when farm kids decide they just don’t want the constant physical labor, robots can be the tools that keep them from running off to the city.

One final disclaimer (after all, we did just point you to a whole bunch of farm equipment ads): While there’s little debate that farm robots certainly look cool, none of these advancements lend themselves to simple moralizing. Technological advances can always be used for both good and evil. None of it is guaranteed to reduce greenhouse gas emissions. Often it takes years to detect unintended consequences, and fix the problems created by the latest fixes.

Ag tech is fun to watch, there’s no denying that. And it deserves our critical attention. We should look at it in the same way we ogle the newest cell phones: With a mixture of desire and healthy skepticism.