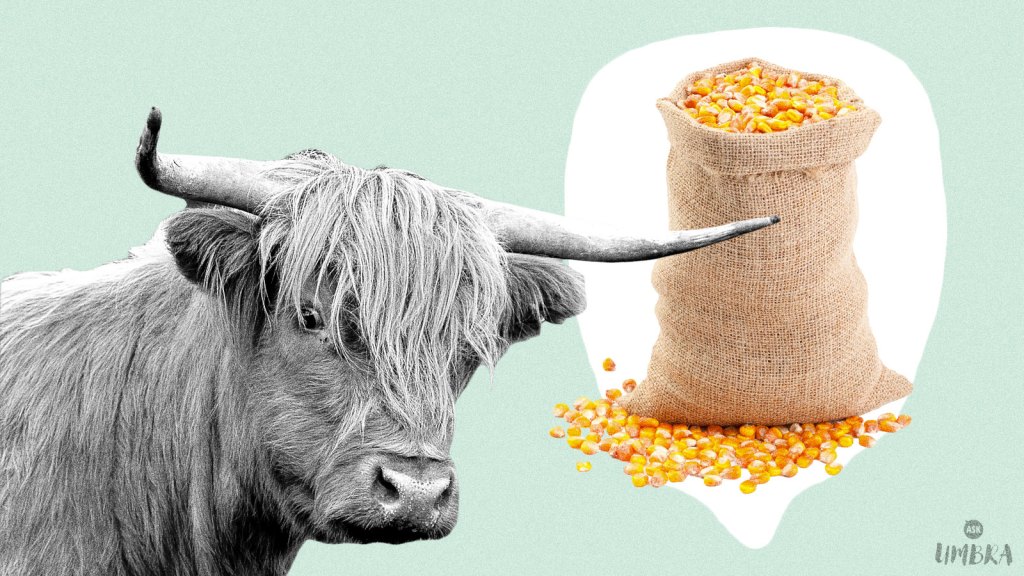 Get the latest from Ask Umbra every weekSubscribe to Ask Umbra

If humans stop eating animals, will we have enough grains to provide for everyone?

Diet is no small factor in the carbon footprint department. Agriculture accounts for more than a quarter of our greenhouse gas emissions, and that’s not even taking into consideration factors like how your food gets from the farm or ranch to your grocery aisle.

The resounding message in the environmental community is: If you want to cut your carbon footprint, go vegetarian. It makes a difference! Since animals aren’t super efficient at converting plants to meat (blame the food chain for this one), it’s always going to take fewer resources to cultivate a plant-based diet than a meat-based one. But if you’re asking if animal feed could skip the cow or pig and go directly to feeding people, it’s not quite so simple.

A 2017 study by the Food and Agriculture Organization of the United Nations found that only 14 percent of what goes to feeding livestock worldwide is currently considered edible by humans. That translates to about 840,000 metric tons of human-appropriate food per year. But the bigger issue, as meat critics tend to point out, is the sheer quantity of land that’s needed to raise livestock and grow their food — about half of the agricultural land on Earth. The vast majority of that land is grassland, roughly a third of which could be used to grow crops.

I don’t think you’re just asking for the simplest way to graze our way out of the climate crisis. Changing how one eats always sounds simple, but it’s really not. As an American meat eater who has attempted various forms of vegetarianism — from veganism to pescatarianism — I think there’s potential for some anxiety around how to best fill the gaps left by a hamburger here and there. It’s easy to let meat-free skepticism (or inexperience) cause you to fill those gaps with something that’s not especially healthy — even if it’s technically vegetarian.

Vegetarian diets are certainly more climate-friendly, but they’re not always more nutritious. A dinner of cookies and ice cream qualifies as vegetarian, after all! (In these times, no judgment.) High-protein dairy products can have a lot of added sugar or sodium. And it’s funny that you bring up grains, specifically, because those tend to be the first thing meat-to-veg converts sub in for animal products in the United States — and most grains lack a lot of the important micronutrients that animal products offer.

A study published in PNAS in 2017 looked at what would happen if we removed animals from agriculture in the United States and, yes, there would be a decrease in greenhouse gas emissions and increase in some nutrients that Americans already tend not to get enough of, but there would also be a decrease in nutrients that we currently rely on! In the researchers’ words, “Overall, the removal of animals resulted in diets that are nonviable in the long or short term to support the nutritional needs of the U.S. population without nutrient supplementation.”

But before you invest in a multivitamin subscription and a 25-pound bag of polenta, keep in mind that any absolute prescription when it comes to climate solutions is not going to work. You are welcome to make the personal choice to switch to a vegetarian diet, but you can’t snap your fingers and get rid of animal agriculture and meat overnight. And if you did, you’d be eliminating a lot of valuable income for farmers and ranchers in developing countries, and a lot of life-saving components of human diets. It’s really about finding a balance. American appetites for beef and dairy products are way too high, generally speaking, to be really climate-sustainable, but animal products don’t need to be abolished altogether.

That advice applies to you too, if you are indeed nervous about going meat-free; you don’t have to go fully vegan to make significant changes. Indeed, paleoclimatologist Maureen Raymo advised that drastically cutting or eliminating beef consumption specifically is probably the best bet to make a meaningful climate difference in your diet — and also to support farms that are raising animals with an eye toward their impact on the Earth.

Because part of the issue is that there are a lot of different ways to raise an animal, and cows have probably the highest variation with regard to the environmental pros and cons of their ah, upbringing, let’s focus on them. A 2019 review from the World Resources Institute, for example, pointed out pretty massive variation in the climate efficiency of cattle-raising across the world; from as low as 5 kilograms of carbon emissions per kilogram of beef to upwards of 1,000.

Project Drawdown, an organization that catalogues climate solutions according to their effectiveness in cutting carbon emissions, 大发快三app网址points to “silvopasture” as an excellent way to keep soil healthy and help farmers and ranchers grow several different types of food at once. It’s the practice of raising cattle in a system of biodiverse forests and pastures, which provides an alternative to the typical deforestation associated with cattle ranching. (Remember the ranchers burning down parts of the Amazon in Brazil to make more room for cattle and the soybeans to feed them?) But it’s also not necessarily scaleable for every cattle-raising operation on the planet!

Furthermore, the FAO study found that the type of high-intensity, close-quartered feed operations for cattle tend to be the ones where they’re feeding the cows the type of grain that could otherwise be consumed by humans — like, for example, those Amazon-clearing soybeans. You can raise a cow in a pasture, and that’s not a very efficient way to raise a cow in terms of how much land and time it takes to bulk up the animal, but it is actually a fairly efficient way to convert inedible plant matter into highly nutritious food for humans.

So if you’ve tried to go vegetarian and you’ve found that you just don’t feel good, it’s OK to go back to eating some meat to keep your body healthy. Diets are not lifelong prescriptions, and you can try different things until you land on a workable balance with your climate ethics and what your body wants.

Readers can upvote a question; Umbra answers it!